Crust or the shell of the Ispagol plant, which is known scientifically as plantago ovata. The shell is separated from Ispagol seeds by sifting it.

Crust or the shell of the Ispagol plant, which is known scientifically as plantago ovata. The shell is separated from Ispagol seeds by sifting it. Natural source of non-starch carbohydrate fibers characterized by their instant dissolving., important for bowel and general health

Mujeza Fiber absorbs water in the stomach and the intestine together with carbohydrates and excess wastes, assumes a mucous-like material that acts as a smoothing protective layer for the walls of the intestines and the stomach, while maintaining its role in the process of food digestion, contrary to the more common liquid Paraffin that interferes with the absorption of basic vitamins and minerals because it acts as a barrier in the inner intestinal wall against the absorption of these substances. The National Program on Cholesterol Education in the United States strongly recommended the use of ispagol. It is now available in the herb stores in the USA, European countries and Japan in its original form, powder form and as capsules with various trade names. 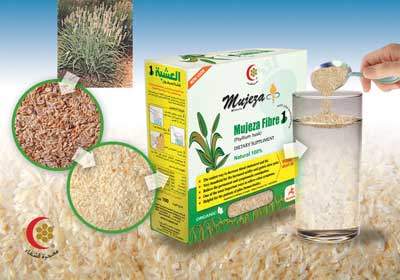 Has cooling characteristics, so it can be used to relieve sever thirst.

Even healthy people can take Mujeza Fiber for its benefits in cleansing and protecting the digestive system. Most medical problems are rooted in the intestines as the accumulation of wastes leads -in the course of time- to the formation of a shell or wall covering the inner surface of the colon, thus preventing absorption and later on increasing the diameter of the colon while anal canal diameter is the same, Thus obstruct the passage of stool. This problem grows complicated with time, and people enter into a vicious circle which can lead to many diseases, in particular colon and rectal cancer, obesity also increases this possibility. Thus, it is preferable to cleanse the intestines to regain their natural function. This can be done by washing bowel with enemas, which is a complicated process that needs a trained expert. The easiest way is to double the dose of Mujeza Fiber, which cleanses the digestive system, improves general health, and boost energy of the body. It is necessary for those who have hereditary factors related to colon cancer, or those who eat a lot of red meat, smoke, use several medications, and suffer from very limited movements, i.e. whose life style is of sedentary nature, or for those who are over 50 years of age. In the west, some leading food industries add Ispaghol to its products, such as superb cake, for adding useful and beneficial fibers to the body.

Adults: 2 Tbsp – children: 1 Tbsp (the dose can be increased or decreased according to the person’s need). In the case of constipation it is added to a cup of water, juice, or milk, it is then stirred quickly and drunk soon before meals. In the case of diarrhea, it can be added to yoghurt in the same way. It may be difficult to drink for the first time, but it will turns easier later. It can be sweetened with honey, sugar, or juice to give it a palatable taste. There are no contraindications for pregnant, lactating and hypertensive women to take Mujeza Fiber. There is no harm if the herb is stopped for a while or altogether. Mujeza Fiber is odorless, tasteless, and has no side effects.

These benefits were proved by the Islamic Medical Center – Ministry of Health in Kuwait. 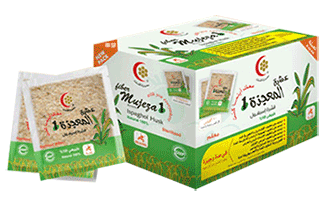 Psyllium is quickly becoming one of the top recommendations for people using low-fiber diets. It is very difficult to get enough fiber in a diet when you eliminate the carbohydrates in cereals, whole grains and fruits. Psyllium capsules are an easy way to take care of this problem. It fills you with fiber, reducing appetite without overstimulating the nervous system; a much healthier approach. WHAT IS PSYLLIUM Psyllium is the husk of the seed of the Plantain and is a top herb used in weight control and for general intestinal health. It contains a spongy fiber that reduces appetite, improves digestion and cleanses the system, making it an excellent choice for healthy dieting.

Psyllium can provide the fiber that is missing on low carbohydrate diets. Every 100 grams of psyllium provides 71 grams of soluble fiber; a similar amount of oat bran would contain only 5 grams of soluble fiber. Only recently have scientists learned that soluble fiber has unique effects on metabolism.The herb also provides a feeling of fullness that is helpful before meals. Psyllium is one of the simplest, healthiest and most effective herbs for weight control.

Mujeza fibre ,this is what you’ve been looking for

In a study of people with ulcerative colitis (a type of inflammatory bowel disorder), psyllium seeds were as shown to be as effective as the prescription drug mesalamine in decreasing recurrences of the disease. In addition, a physician may recommend the use of psyllium as a bulking agent for mild to moderate cases of diarrhea from either ulcerative colitis or Crohn’s disease (another type of inflammatory bowel disorder). Research reported in The American Journal of Clinical Nutrition concludes that the use of soluble-fiber cereals is an effective and well-tolerated part of a prudent diet for the treatment of mild to moderate Hypercholesterollaemia. Soluble fibers such as those in psyllium husk, guar gum, and oat bran have a cholesterol-lowering effect when added to a low-fat, low-cholesterol diet. Studies reported in The American Journal of Clinical Nutrition have shown psyllium to be quite effective in lowering total as well as LDL (“bad”) cholesterol levels, which can be helpful to those with high cholesterol and those at increased risk for developing hypercholesterolemia, such as people with type 2 diabetes.Studies and clinical reports suggest that psyllium may enhance the sensation of fullness and reduce hunger cravings. For these reasons, incorporating psyllium and other sources of fiber into the diet may aid weight loss.

VERY USEFUL IN SLIMMING THROUGH MORE THAN ONE MECHANISM

These benefits were proved by the Islamic Medical Center – Ministry of Health in Kuwait. 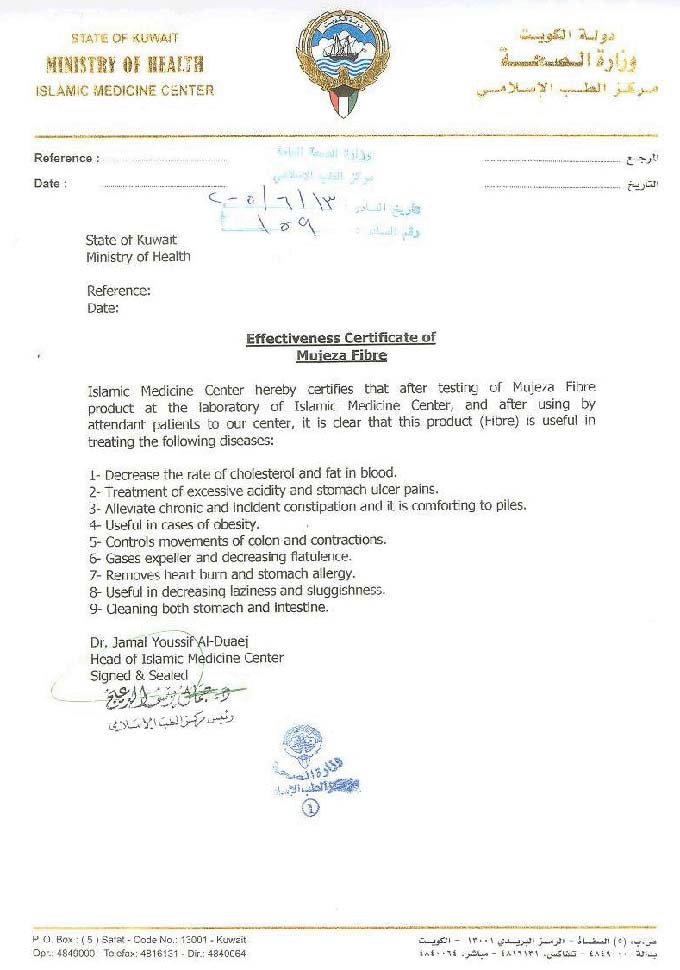