Honey spoons of Sider Honey with royal jelly and ginkgo

Luxury natural honey extracted by bees from the jujube nectar (jujube plant) derived from the acanthoid subfamily that grows in arid mountains in the Arabic island and the surrounding areas. This honey is known by its high nutritional characteristics and it is requested by the citizens of these regions because of its multiple particularities and they used to offer it in the ancient time as gifts for kings and leaders as a sign of love and respect. In this product we added royal jelly. 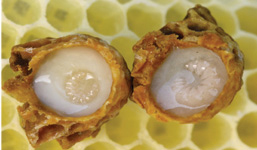