Ameer al-Umra Yemeni Hadrami honey is one of the finest types of Sidr honey, monoflowral source of sider flowers from the valleys of Yemen.

It is the blond honey extracted from Sidr trees and thistles scattered in the valleys of Hadhramaut in Yemen. 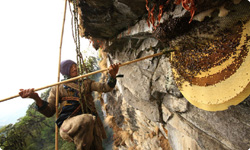 It is one of the most distinguished types of honey in the world in its therapeutic properties because it contains a high percentage of antioxidants compared to other types of honey, and its electrical conductivity is higher, reaching 0.8 units, and this is evidence of the presence of minerals in it significantly, as well as its pH is higher than other honeys and approaches neutrality,

So, it takes a few seconds to dissolve in the bloodstream when ingested, providing a high-quality and effective source of energy, minerals, and vitamins. This Honey with these medicinal properties is very popular among Olympian-level athletes, so it is taken before vigorous exercise.

It has been preferred by herbalists for treating diseases and promoting health because it gives better results compared to other types of honey. Sidr honey is rich in vitamins, minerals, amino acids and methylglyoxal content in comparison to all other types of honey available in the global markets when it comes to quality. Also, Sidr honey contains the lowest water content, which not only increases the effectiveness of the immune system, but also increases the duration of time. validity

Some of its benefits:

Strengthen the nervous system, very useful for insomnia and migraines

Relieves acidity and ulcers of the duodenum and stomach, useful for asthma, allergies and arthritis.

Nourishing for patients with anemia and strengthens the heart.

Useful for pregnant women and nourishing them and the fetus and helped in its growth.

It is used in the elimination of many diseases: activates the immune system and is useful for infectious diseases of the chest and stomach

To stimulate reproductive organs, sexual tonic and to strengthen bones

Several laboratory tests were carried out on Sidr honey at the Kuwait Institute for Scientific Research (a government research institution with high capabilities and high-tech equipment) where the quality of Sidr honey was confirmed.

The study conducted on (rats) showed that the pharmacological effect of Sidr honey is higher than that of aspirin and indomethacin (anti-inflammatory and analgesic).

Research is still underway to determine the pharmacological mechanism of Sidr honey and its effectiveness in treating other diseases, and the study is the first scientific document to be published internationally. The study was published in the Journal of the International Academy of Medical Sciences, Engineering and Technology and the Supreme Court

. The research was also discussed in a conference held in France – Paris, August 2011, and Britain – London, December 2011. It is worth mentioning that the researcher is a student from Yemen studying medical genetics and biotechnology in Malaysia. She is a member of the American Society of Pharmacology and Therapeutics, and a member of the British Pharmaceutical Society.

Despite these obvious facts, Sidr trees are still shrouded in a lot of mystery in Arab culture, and Sidr honey is said to be used in witchcraft and sorcery along with other healing uses. Hundreds of years ago, Sidr honey was presented as a gift to kings and princes to express appreciation and loyalty. And in other cultures, we found that the ancient Indians used Sidr honey to solve problems with eyes and clear vision. In Western culture, Sidr trees are considered sacred among Christians.

The Arab Beekeepers Union, during its sixth international conference, revealed a research conducted at the Faculty of Medicine – University of Aden with the aim of studying the effect of four types of Yemeni honey, namely, Sidr, Samar, Qasas, and Almarai for the treatment of abscesses in the breast and glutes.

The Union of Arab Beekeepers also revealed, during its sixth international conference, another research conducted by the Plant Protection Department at the Faculty of Agriculture – Sana’a University, with the aim of knowing the effect of six types of Yemeni honey, namely, Salam, Sidr and Sabi, Sidr Doani, Flowers, Pasture Douani, Samar and another Australian commercial with five Concentrations (.5%, 1%, 5%, 10%, 20%) against the bacterial growth of Salmonella, Escherichia coli, Staphylococcus aureus, Pseudomonas aurogenosa, Proteus, and the results indicated that Salam honey, flowers, and pastures had the best effect. On the tested bacteria, Sidr and Saby honey comes in second place in terms of the selected antibacterial effect. While Sidr Douni honey came in third place. Commercial honey was shown to encourage bacterial growth. The results showed that the best concentrations affecting the growth of tested bacteria for all types of honey were 20% concentration, followed by 10% concentration. Marai Doaani honey was distinguished by its anti-growth ability of E.coli and Pseudomonas bacteria at all concentrations, as well as a graded anti-growth of Staphylococcus aureus at concentrations of 5%, 10%, 20%. Sidr Doaani honey is superior to all types of honey in its anti-bacterial effect, with high vitality at 20% concentration. It showed Low concentrations of 0.5%, 1%, 5% for most honeys encouraged the growth of the tested bacteria similar to or higher than the control sample.

Experiments start through the Mujeza lab by making a culture of germs, microbes and yeasts and observing the ability of some types of honey (Manuka honey – Sidr honey – Nigella sativa honey) to eliminate them.

Determining the types of honey according to the botanical (floral) and geographical source:

Each type is distinguished by its special physical characteristics that beekeepers and honey tasters know only, such as the color of honey, its taste, its flavor – and its smell that is transmitted to the honey from the flower. Exposed to high heating loses the aroma and flavor of honey)

– Each type is characterized by a special color from transparent to white, yellow, red, brown, dark and black, and this is according to the flower and beekeepers distinguish it easily and to measure the color of honey there is a special device called pfund measurement

– According to the electrical conductivity’s number of each type of honey, it is identified by a special device in the laboratory.

– The most important method that is universally relied upon to determine the flower of honey and the geographical location of honey is to determine the type, shape and number of pollen grains in honey by microscope and matching it with pollen grains around the world through the pollen atlas. They are like the fingerprint of each honey precisely.